I had fiddled with one of these a couple years back, but here's another chance to take a look inside a (1st gen) Focusrite Scarlett 2i2, their second-smallest USB audio interface of the range. 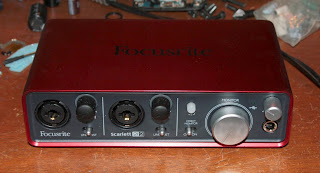 Two ins, two outs, pretty much all you need in order to get started with home-recording (of a higher quality level than using the on-board soundcard in your laptop or desktop, that is).

Same chunky extruded aluminium housing as its larger brothers (the Scarlett 18i8 and, to some extent, the 18i20), which facilitates quite simple assembly and servicing. First part to come off is the rear panel, once the 1/4" jack socket nuts are removed, as well as three mounting screws. 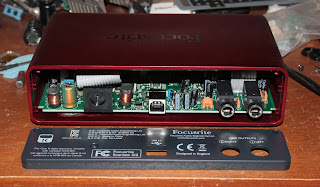 Two internal clips undone, and the guts can slide out the front. Not terribly much on the inside, but then again, there's not all that much required nowadays. 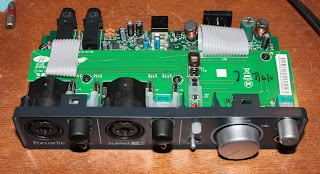 A closer look with the front panel reveals a bit more of the internals, but the top daughterboard needs to come off as well. 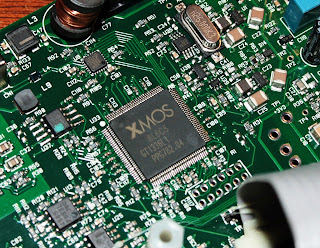 Where previously a Cirrus Logic CS2300 PLL clock generator was found, here it's a Microchip PL611 (the C1L95-marked 8-pin chip right next to the 26MHz quartz crystal). In the vicinity we also find two OnSemi NCP1521B step-down converters (GALRZM marking), and an OnSemi NCP303 voltage detector (SOERZJ marking), for keeping the processor in reset until its supply rail has stabilized. 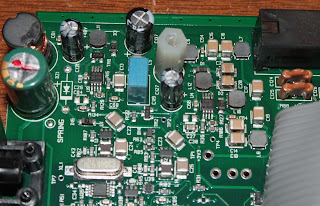 The power supply section, apart from the two chips mentioned just above, there's a pair of Intersil / Renesas ISL97519A step-up regulators - one (U9) handling the generation of the +48V phantom-power, and the other one (U4) handling the analog supplies (+/-5V or 7V, i neglected to measure). 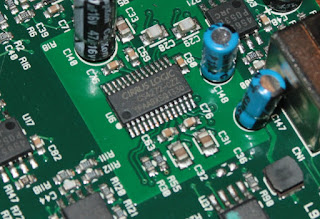 Even though this is the baby of the Scarlett range, they haven't skimped on components. Granted, partially due to economies of scale as well, no doubt. But the audio conversion is taken care of by a lone Cirrus Logic CS4272, just as in its bigger brothers. 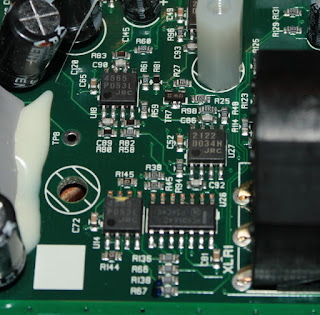 On the analog side of things it's "business as usual" as well - NJM4565 opamps and NJM2122's as the adjustable preamplifiers. Unlike the bigger units though, the input switching is routed through an OnSemi MC74HC4066 quad SPST analog switch (as opposed to 4052/4053 multiplexers). I'd reckon that choice was made more out of board real-estate reasons rather than other considerations.

On to the modding stage then. One of the very few complaints regarding this first generation 2i2's was that, on the instrument input, the preamps reached clipping disappointingly soon, even with the gain adjustments at minimum, and especially when used with guitars with higher-output pickups. As mentioned right at the beginning, i had done a bit of tweaking on a 2i2 belonging to a guitarist bandmate, which helped things somewhat. At the very least, he's yet to complain about the issue, so i guess it must've worked well enough (at least for his guitars). 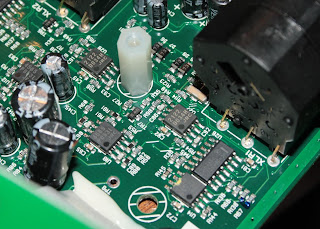 All stock, with the gain controls at minimum, the input clipping indicators (red LEDs) come on when the input signal reaches around 3.6Vpp. With the above-mentioned resistor values, and the 20k gain potentiometer (which is actually a stereo 50k with the two sections wired in parallel), the minimum gain coming out of the NJM2122 is 2x. Through a bit of LTSpice simulation as well as messing with a couple resistor values, i managed to figure out that, by reducing the value of the 10k feedback resistors around each of the two halves of the NJM2122's, i could reduce the minimum gain there. Sure, that would then also limit the maximum gain available, but at least in these usage cases, that wouldn't be an issue (no ribbon mics in use, nor terribly insensitive dynamic mics used on quiet sources). 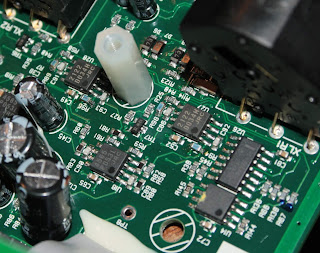 Reducing the 10k's to 5k (by just piggybacking another pair of 10k's on top of the existing ones), the clipping point moved up to around 4.6Vpp; further reducing that to 3.3k (with yet another pair of 10k's) resulted in a clipping point around 5Vpp. That's a ~4dB increase in headroom - not stellar, but without totally reworking the preamp design, or increasing the power supply rails, it seemed like the best(?) way to go given the situation. This time around though, i had some 4.02k 0603-packaged resistors handy (the blue ones), which when parallelled with the stock 10k's came out close-enough to the 3.3k from the previously-determined tests, so that's what went in.
Posted by Khron at 13:16