A local friend bought this slightly battle-scarred Focusrite Scarlett 18i20 off a buddy of his. The reported issue was some random / intermittent noise affecting only the inputs. Time will tell if that was conveyed to me accurately, or if it's a more global issue. First thing's first though - having a wee little look-see on the inside.

The overall structure and layout is virtually identical to its "older cousin", the Saffire Pro 40 (apart from the Firewire vs. USB connectivity, and the newer unit having a Wordclock output).

This time, this is getting done right: not turning it on, but taking it "apaaaah't". That being said, i'm most definitely not the first one taking this step, what with the 10 out of 14 screws missing, from the ones securing the top cover to the chassis. 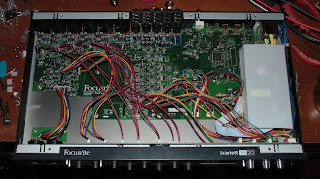 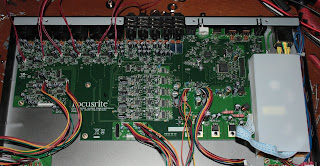 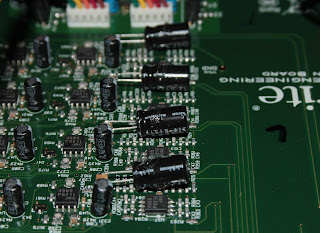 I see some vague mod attempt - four added electrolytics, in parallel with the pre-existing 1210 SMD ceramic caps, in the vicinity of the group of opamps dealing with, most likely, the analog outputs. I highly doubt this was a factory bodge - i had cracked open one of these 18i20's a couple years back, and there was no trace of any "afterthoughts". Leads were left quite long, but at least they're secured to the circuit board with a dollop of hot-melt glue.

But better not get ahead of ourselves, eh? Starting off with the power supply - nothing to write home about, really. Just your bog-standard flyback converter, with multiple outputs. The main silicon is a CS8N50F N-channel MOSFET, and an MBR10100CT dual 5A 100V Schottky rectifier (for the 5V and/or 3.3V rail). The controller's most likely some 8-pin job, along the lines of a UC3842. 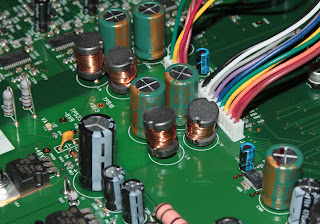 CapXon electrolytics though - never a good sign. Almost exclusively, save for the odd Jamicon here and there. 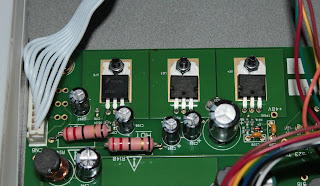 The power section of the circuitry continues on the mainboard - an LM317 / LM337 pair regulating the +/-6.9V for the opamps, and another LM317 handling the phantom-power rail. 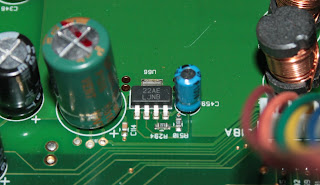 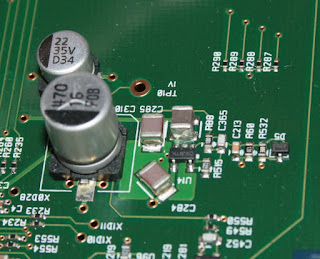 A tiny little OnSemi NCP1529 provides the 1V rail for the processor cores. 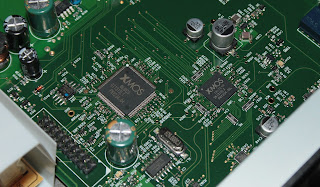 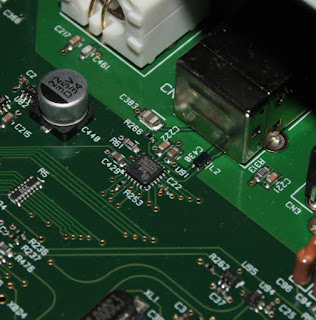 An SMSC (now Microchip) USB3343 is in charge of the USB interface, just as in the smaller Scarlett 18i8. 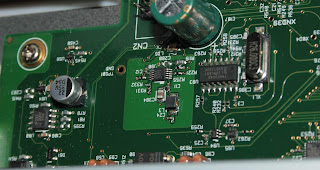 Keeping with the digital side of things, a Cirrus Logic CS2300 PLL is used. And off towards the edge of the board, a National Semiconductor (now TI) DS89C21 differential line driver handles the S/PDIF output.

The audio conversion is handled by a quartet of Cirrus Logic CS4272, plus an additional CS4392 (since there are ten analog outputs available). 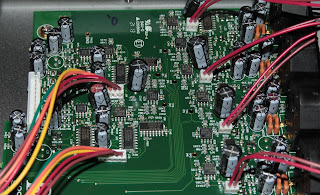 The analog side of things is made up mostly of JRC NJM4565 opamps, plus eight NJM2122's on preamp duties, plus a pair of TI TL072C's for the high-impedance instrument inputs. The smattering of NXP (now Nexperia) HEF4052B and HEF4053B analog muxes does all the signal switching & rerouting between the mic inputs, line inputs and instrument inputs. 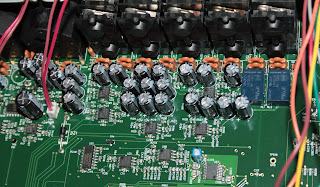 More NJM4565's in the analog output area, along with the pair of Panasonic / Matsushita TQ2 relays, for muting the main stereo output upon power-up and power-down.

I told you the "family resemblance" with the Saffire Pro 40 wasn't a coincidence - the front panel is literally identical. Well, the part that matters, anyway, ie. the circuit board. 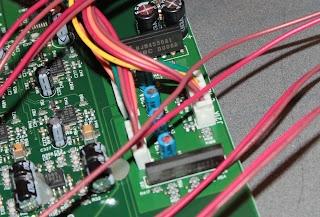 And last but not least, a pair of NJM4556A's drive the two headphone outputs.

Right-o, with all that out of the way, time to power this thing up, "at long last". All the power rails check out fine. And as i had suspected, the added-on caps are indeed on the "Vcom" half-supply bias outputs, coming from the DACs.

Driver / MixControl detected it just fine upon plugging in, firmware update was succesful. All that's left is to hook it up into (or rather, through) my system here, and wait / hunt for issues.

About an hour of music listening later, no issues. Granted, i updated the firmware to the latest version (from the latest beta of MixControl, 1.10b3 as of right now), so for all i know, that might've already mitigated the problems, but i suppose only time will tell. I'll add any updates here, if any come up.